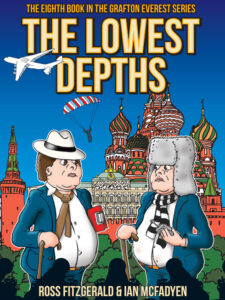 The eighth book in the Grafton Everest series is back in the hands of the prolific and visionary author Ross Fitzgerald, teamed up again with comic genius Ian McFadyen, and sees the hapless ex-President of the Republic of Australia, Dr Professor Grafton Everest, caught up in a web of international espionage and intrigue that he is hopelessly ill-equipped to handle.

Abandoned to his own inadequate devices when his wife Janet departs on a world tour, with his home invaded by his now broke daughter and son-in-law, Grafton accepts an assignment with the United Nations to investigate electoral fraud in Russia. The reason is not only to get out of the house; an old letter from his mother, addressed to someone in the Soviet Union fifty years ago, suggests that Grafton may not be the only child that he always thought he was.

Grafton’s mission to Moscow and his search for this mysterious sibling take him far from the Russian capital, deep into the icy wastes of Siberia and even deeper in a tangled conspiracy whose roots extend back to the Cold War and even as far back as the Russian Revolution.

“The Lowest Depths is the best Grafton Everest adventure yet.” – Carl Harrison-Ford

The eighth Grafton Everest adventure, The Lowest Depths, is published by Hybrid Publishers in Melbourne.